AR-3 Recumbent Ebike, tadpole trike. The AR-3 shown in photos and videos is from the 1st production run. Frame Kits and complete trikes are available to order now with shipping in early 2021.

The AR-3 is for people that want to have a bicycling experience, with the comfort of a recumbent trike.

Remember the first time you learned to ride a bike?  Banking into the corners like some of the experiences first felt like flying.

Natural feedback from the machine like being one with it.
This makes for a special enjoyable experience.

Lightweight and simple design like a bicycle but with more efficiency, because of its low frontal area reduces wind drag.

All the Benefits of three wheel recumbents, but with all the virtues of a bicycle.

Guaranteed to open up a whole new Window to the world, of your biking experience.

Stay comfortably on top of your health while adding a whole new dimension to biking.

The Patented steering design is like no other and follows the natural feel of a bicycle because of its center axis steering system, which emulates the feeling of a bicycle while banking into turns with all three wheels. Now AR3 Recumbent Ebike Tadpole Trike.

What you’re seeing is a design I personally invented in 1980 and perfected over the next 2 years. After a several decade hiatus while starting a business and family, I feel the advent of electrified bicycles and pedestrian bike trails the time is right to reintroduce the world to this tried and true design.

Incidentally there were almost no trike designs on the market back when I developed this configuration. The natural bicycle feel, gives the rider the experience of being one with the trike as they negotiate traffic and obstacles.

The E-bike version is all we have fully assembled.
Total weight: 48# riding weight.
Steering Radius: 8.5’
The frame was FEA static tested to 480# but we recommend 250# for best riding results. I would keep the cargo balanced for a more pleasurable ride.
Width: 36”
Length: 84”
Height: 26” with backrest retracted. 3“ additional with backrest fully extended.
Ground clearance: 4.5”

Being prone also gives a great aerodynamic advantage lending itself to going further and faster with the less effort than a conventional bicycle. Obviously many of us don’t wish to or can no longer perch on a standard bicycle seat. The seat on the AR-3 is comparable to a high performance sports car bucket seat.

Articulating all wheel tilting steering for recumbent tricycle and other vehicles providing stability and controlled lean of all three wheels simultaneously.

Consisting of a single front steering yoke that rotates or steers, on a pivoting axis neck, with a negative castor angle and bearing on the stationary frame which forces the rear wheel and frame to actively tilt into the direction of the turn.

The active front wheel leaning linkage consists of, the front steering yolk with horizontal bushings on the outer ends, which only allows the front wheels axles and control arm assemblies to lean in toward the turn producing a camber to both front wheels.

Tie rods, connected to the front wheel’s spindle assembly and anchored to the frame, forward of the pivot axis, actively linking handlebars, front wheel and frame tilt together thus causing all wheels to lean together when directional force is applied.

See the performance and stability in the ride videos  on the “Videos and Links” page, AR-3 Recumbent Ebike.

Electric assisted human power is a great way to get and stay healthy, while saving money on second vehicles. Not to mention helping our sacred planet.

Conventionally steered recumbent tricycles suffer from handling and wheel scrub problems. The tricycle may experience undue amounts of roll when the rider turns or corners as the centrifugal force of the body mass is thrown to the outside in a corner. The roll feeling is unsettling to the rider, makes steering progressively more difficult with speed and can cause the rider to lose control or tip over.

Tadpole recumbent trikes by definition, “Recumbent” means that you are in a reclined or seated position with your feet in front of you. The Peddle crank is on a boom out in front. These “trikes” have three wheels with two in the front and one behind the rider. Power moved to the rear driving wheel by a chain or belt. This style of trike is known as a “tadpole”. The tadpole trike can be completely human powered, peddle assisted with electric motor or other motor drives. Steering the front wheels by levers or handle bars. The advantages of a low center of gravity, improved aerodynamics and comfort are the results of this configuration.

Following the commercially available recumbent tadpole trikes for many years, I discovered they all typically use the same steering systems. Similar to an automobile they must design an interference angle in the steering systems named Ackerman compensation, whereas when steering around a radius the wheels are steered at different angles following their own perspective arc.

Most of these designs inherently have “wheel scrub” and a twitchy steering control inherent in these steering designs produce side load on the wheels, spindles and spokes. Furthermore steering input is a side to side action opposite of the desired steer direction.

My idea was to simplify the steering theory to include a central pivot and yoke system similar to a headset on a bicycle or motorcycle, basically mimicking bicycle steering geometry. The yoke is acting as the fork on a bicycle and the similar steering input to point in the direction of the turn.

Because the frame has to lean into the corner, I gave it approximately 45 degree angle where the pivot shaft of the yoke connects to the main frame.  This insures the ratio between the Body/frame lean was on a one to one angle with steering input.

To tilt the front wheels and follow the approximate frame/body lean and subsequently stabilize any ill effects of the extreme negative castor, I attached tie rods to the control arm pivots of the spindle assemblies. Then anchored the tie rods to the frame at an adjustable location.

This actively links the frame/body lean to the front wheels tilt, also stabilizing the overall steering. In this configuration while in a turn, the outer front wheel track becomes progressively further away from the center of the frame acting as a stabilizing “outrigger”. At the same time the inner wheel tracks closer to the center of the frame and tracks more closely to the rear wheel path. This way the vehicle gives the experience of riding a two wheel bicycle.

After riding this design and comparing it to standard recumbent designs, it became apparent the nature of the bicycle leaning. Whereas the mass of the rider is shifted to the inside of the corner, thus mitigating the feeling of centrifugal force of the body’s mass being thrown outward on corners. This also reduces roll, flipping and loss of steering control.

Unlike conventional recumbent trikes this design can be ridden “hands off” by merely leaning into the turns as it’s possible to do on a two wheeled bicycle.

There are no reviews yet. 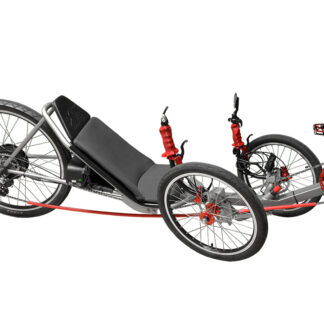